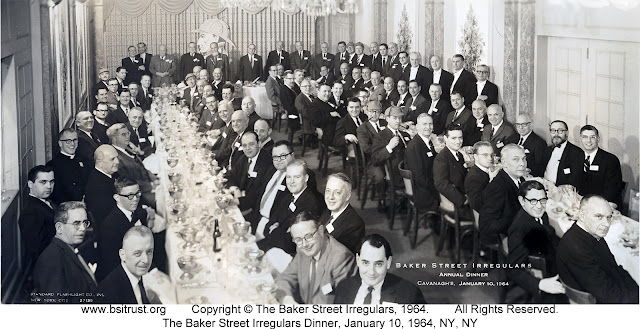 A record 84 attendees gathered to commemorate Sherlock Holmes’s 110th Birthday.  After Lisa McGaw had been toasted as “The Woman,” Rex Stout called the assembly to order. Departed members were memorialized, and messages of greetings from absent members and Sherlockian societies at home and abroad were acknowledged.  It was announced that the late Jay Finley Christ had received the highest Irregular honour, the Two-Shilling Award, in November.  An unusual award, “a medal as large as a soup plate,” was presented to one of the waiters for long and faithful service. (“They also serve who only stand and wait.”) Irregular Shillings with Investitures were bestowed upon seven new members.

It was announced that Edward F. Clark, Jr. had won the Morley-Montgomery Award. Herbert Brean then presented a vivid and hilarious account of the difficulties encountered by two budding authors (Poe and Doyle) in their attempts to break into print. The Five Orange Pips Quiz was next on the agenda. The formal part of the programme ended with Lord Donegall's message from the Sherlock Holmes Society of London and the reports of our Scion Societies.

The Woman:
Lisa McGaw.
What is The Woman honour?

"Stand with me here upon the terrace..."
(as named at this Dinner, not their year of passing)
None listed in the 1964 BSJ report.
What is the origin of “standing on the terrace?”

1964 BSI Dinner Menu (digitized image at Harvard)
Interior and cover and  back. Sequence 15-16.