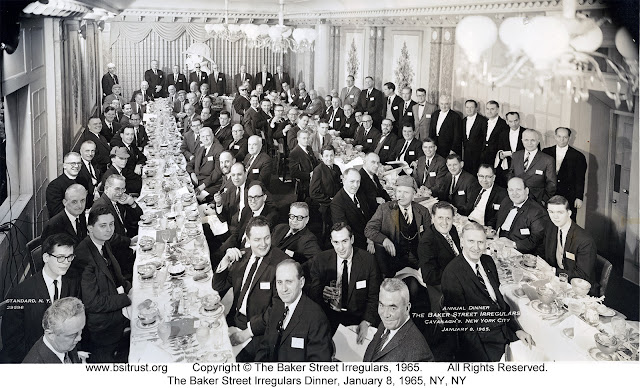 Julian Wolff’s summary of the 111th Birthday Dinner records that “once more the attendance record was broken; 89 of the faithful were present.” Overseen by Rex Stout and chaired by Tom Stix (Sr.), all proper and improper festivities and rituals were observed. Eleanor Cryan (Mrs. Julian) Wolff was honored as The Woman. Canonical and Irregular toasts were proffered, and Bruce Montgomery delighted attendees with a sequel to his father’s established musical masterpiece, “Aunt Clara.” Ten Irregulars were invested at the Dinner. Dr. Marvin Aronson and Herbert Brean delivered papers. Subsequently, reports and addresses from Scions worldwide were delivered aloud.

Investitures:
John D. Clark as The Politician, the Lighthouse, and the Trained Cormorant
Frank J. Eustace Jr. as Cox and Co.*
Henry T. Folsom as The Golden Pince-Nez
Alan Foster as A Commission from the Sultan of Turkey
Ebbe Curtis Hoff as Dr. Leslie Armstrong
Charles B. Howland as Sir James Damery
Elliot Kimball as Professor Coram**
John B. Koelle as The Sussex Vampire
Edward S. Lauterbach as Thorneycroft Huxtable, M.A, Ph.D., etc.*
Richard D. Lesh as The Fatal Battle of Maiwand
David Levinson as Count Von und Zu Grafenstein
John Bennett Shaw as The Hans Sloane of My Age*
Martin J. Swanson as The Dundas Separation Case
Edward J. Van Liere as The Priory School*
* received Investiture at another event during the year
** in absentia
What is an Investiture?

The Woman:
Eleanor Cryan (Mrs. Julian) Wolff.
What is The Woman honour?

"Stand with me here upon the terrace..."
(as named at this Dinner, not their year of passing)
None listed in the 1965 BSJ report.
What is the origin of “standing on the terrace?”