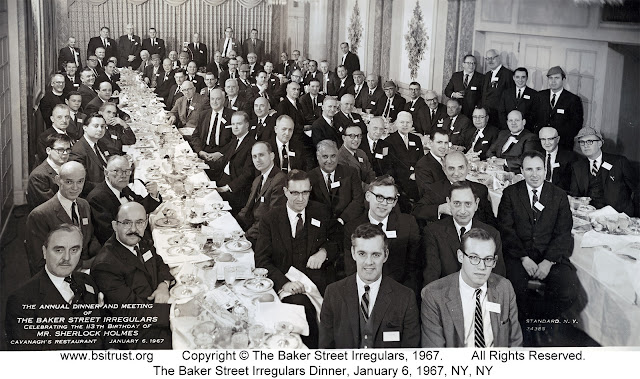 An unfortunate milestone marked Sherlock Holmes’s 113th birthday: Rex Stout, the long-time master of ceremonies, was unable to be present. Nonetheless, the timely and timeless Sherlockian rituals and rites “were meticulously carried out.” There were the “Conanical” and the Irregular toasts, readings of the Constitution and Buy-Laws, the Musgrave Ritual, Sherlock Holmes’s prayer, and Irregular music. Missives from Sherlockian individuals and societies from around the world, including messages from Adrian Conan Doyle and the Sherlock Holmes Society of London, were read aloud. Peggy (Mrs. James) Nelson was toasted by William Baring-Gould as The Woman. Four new Irregulars were invested at the Dinner. Three papers of “unusually high calibre” were delivered by John McCabe, John Bennett Shaw, and H.W. Starr, and the festivities concluded with “much Sherlockian discussion.”

Investitures:
T. S. Blakeney as A Norwegian Named Sigerson*
J. Randolph Cox as The Conk-Singleton Forgery Case*
Karl Krejci-Graf as Baron Gruner, the Austrian*
Bryson Kalt as Charles Augustus Milverton
Edgar H. Lawrence as The Matilda Briggs
Stanley MacKenzie as The Man with the Twisted Lip*
Orlando Park as The Final Problem
Franklin Rhode as My Old Friend Charlie Peace*
Albert Silverstein as Professor Presbury
* received Investiture at another event during the year
What is an Investiture?

The Woman:
Peggy (Mrs. James) Nelson
What is The Woman honour?

"Stand with me here upon the terrace..."
(as named at this Dinner, not their year of passing)
Not listed in the 1967 BSJ report.
What is the origin of “standing on the terrace?”