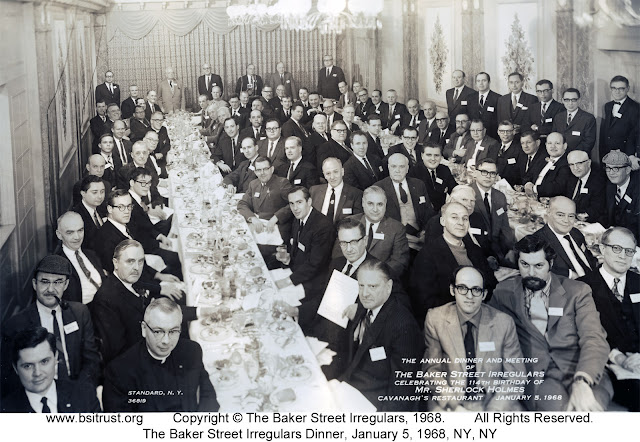 Sherlock Holmes’s 114th birthday is possibly best known for an historic event that happened outside of the Dinner.  During the cocktail hour that preceded the Dinner, six young women from Albertus Magnus College in New Haven, Connecticut picketed the BSI in front of Cavanagh’s restaurant for not allowing women into the Dinner.  When Julian Wolff heard about the picketing, he said to John Bennett Shaw and Peter Blau (with whom the women had corresponded), “Your damned girls are at the door. Do something!"  Shaw and Blau invited the women into the downstairs bar where the women composed a manifesto to be read to the BSI.  "Gentlemen' this is it! We have long been distressed by your apparent reluctance to admit ladies into the BSI. In order to bring our opinion to your attention we have come here through the bitter chill of winter to ask you to reconsider and bow to the feminine influence. It is not for ourselves that we have come—oh, no! it is for those lovers of Sherlock Holmes everywhere (he did get around a lot). In conclusion, we hope that when you are choosing new members you will give equal consideration to the feminine Irregulars." When read to the BSI, the manifesto was met with a deafening silence.  However, the young women went on to form The Adventuresses of Sherlock Holmes, which became a national Sherlockian organization and still thrives today.

The dinner, itself, was marked by “capacity attendance,” Julian Wolff’s Commissionaire’s Report notes. All Canonical rites, including the Irregular toasts, Sherlockian musical performances, and the recitation of the Musgrave Ritual and Sherlock Holmes’ Prayer, were closely observed. Regine (Mrs. Thomas L.) Stix (Sr.) was toasted as The Woman. Tributes were paid to Sherlockian luminaries who had recently passed, such as William S. Baring Gould and Basil Rathbone. After judges H.W. Starr and James Nelson awarded the 10th annual Morley-Montgomery Award to William Baring-Gould’s “Mrs. Hudson’s Inheritance,” the impresario behind the $100 check, Lew. D. Feldman, was honored for his support of this prize by being named “Guest of the Irregulars.”

Seven Irregulars were invested. The Commissionaire, who during the course of the evening was “surprised and flattered—and delighted” to receive the Two-Shilling Award, closes his account with the estimation that “this was one of the best dinner-meetings we have ever had.”

Investitures:
Marvin E. Aronson as Penrose Fisher
Terry Belanger as Cartwright
Ralph Earle II as Joyce Cummings
Daniel Griffin as General de Merville
Harry Hartman as The Ancient British Barrow*
Herman Herst Jr. as Colonel Emsworth, V.C.
Willmer A. Hoerr as The Famous Card Scandal of the Nonpareil Club*
Charles Kaegebehn as Birdy Edwards
Fred Kelly as Robert Ferguson
Bruce Kennedy as Bannister*
Bernth Lindfors as Thor Bridge*
Jason Rouby as Vanderbilt and the Yeggman*
Richard Wait as The Speckled Band*
* received Investiture at another event during the year
What is an Investiture?

The Woman:
Regine (Mrs. Thomas L.) Stix (Sr.)
What is The Woman honour?

"Stand with me here upon the terrace..."
(as named at this Dinner, not their year of passing)
William S. Baring-Gould
Richard Horace Hoffmann
Robert K. Leavitt
Basil Rathbone.
What is the origin of “standing on the terrace?”