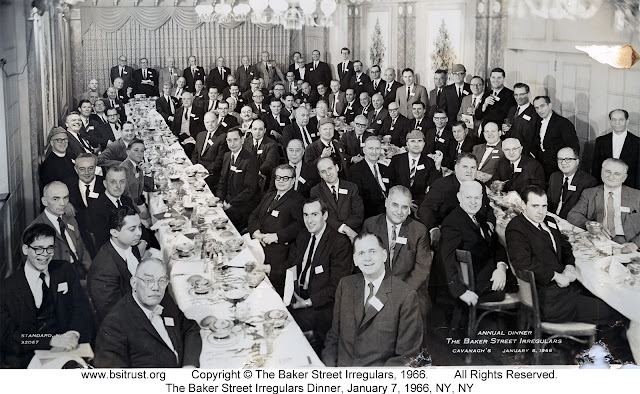 Sherlock Holmes’s 112th Birthday celebration took place against the backdrop of a New York transit strike. But, Sherlockians are undaunted. The dinner enjoyed “a near-record attendance,” including visitors from California, Illinois, Nebraska, and Oklahoma. Pola (Mrs. Rex) Stout was honored by Tom McDade as The Woman. Canonical and Irregular toasts were offered, and Scion reports from around the world were delivered. Three Irregulars were invested at the Dinner. Near the evening’s closing, the master of ceremonies, Rex Stout, received a “unique” award, The Order of the Blue Carbuncle. Tom Stix (Sr.) and Herbert Brean delivered learned papers, followed by toasts and disputations to round out the evening.

Investitures:
John R. Hendrickson as The Musgrave Ritual
George K. Hourwich as Sutro, the Lawyer
Ames Johnston as The Missing Three-Quarter*
John McCabe as Those Chaldean Roots . . . of the Great Celtic Speech
L. A. Morrow as The Grice Patersons in the Island of Uffa*
Luther Norris as Monsieur Oscar Meunier, of Grenoble*
Chris Redmond as Billy*
Ralph Reppert as Horace Harker*
* received Investiture at another event during the year
What is an Investiture?

The Woman:
Pola (Mrs. Rex) Stout
What is The Woman honour?

"Stand with me here upon the terrace..."
(as named at this Dinner, not their year of passing)
None listed in the 1966 BSJ report.
What is the origin of “standing on the terrace?”

Stout, Pola, Note to Julian Wolff accepting the honour of The Woman (PDF)