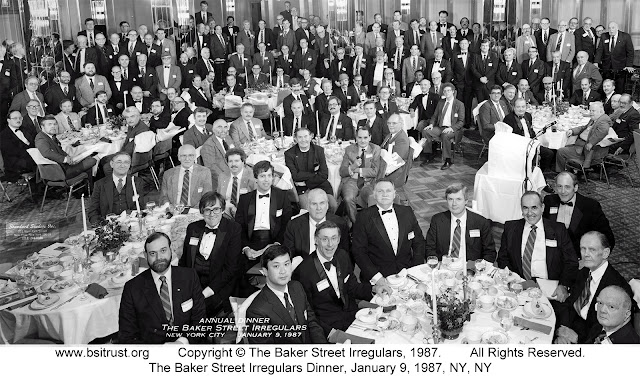 The 133rd “well-attended and thoroughly Sherlockian” birthday dinner also marked the 100th anniversary of “A Study in Scarlet,” which first appeared in the 1887 Beeton’s Christmas Annual. Edith Meiser, who brought to us the radio series that featured William Gillette, Basil Rathbone, and many others in the role of Sherlock Holmes, was deservedly honored as “The Woman.” This was the second time that Meiser was so honored. Long before the BSI formalized an annual “The Woman” honor in 1961, the BSI periodically invited a woman to the cocktail hour that preceded the BSI Dinner and honored her.  Edith Meiser was the first, in 1942. While it is not clear if she was specifically toasted as The Woman in 1942, the BSI considers the honour to have begun in that year. This was the first Dinner presided over by Tom Stix, Jr.  He announced that there would now be two other officers, John Bennett Shaw as “Simpson” and Robert E. Thomalen as “Cartwright.”  Albert M. Rosenblatt gave a poetic toast to Mrs. Hudson.  James C. Cleary presented a well-illustrated and finely crafted lecture on Sherlock Holmes and Sherlockians. Norman M. Davis fervently defended “The Chicago Four.” Steven Rothman offered a history of the new BSI necktie. William D. Jenkins discussed Sherlockian pastiches and parodies, and Chris Steinbrunner reminisced about recent and not-so-recent annual dinners.

The cocktail party on the following day, January 10, honored Julian and Eleanor Wolff. The BSJ recounts that Eleanor received a Queen Victoria Medal, acknowledging her long service as the BSI’s “most devoted camp-follower.” Attendees were also treated to Isaac Asimov's new Sherlockian song that year, which was set to the tunes of "Yankee Doodle" and "Der Tannenbaum.”

Investitures:
Ray Betzner as The Agony Column
Robert C. Burr as The Rascally Lascar
T. Michael Kaylor as Practical Handbook of Bee Culture
George R. Skornickel Jr. as Heidegger
Kiyoshi Tanaka as The Japanese Cabinet
Edward J. Vatza as A Typical American Advertisement
Richard S. Warner as High Tor
* received Investiture at another event during the year
What is an Investiture?

The Woman:
Edith Meiser
What is The Woman honour?

"Stand with me here upon the terrace..."
(as named at this Dinner, not their year of passing)
Not listed in the 1987 BSJ report.
What is the origin of “standing on the terrace?”

List of 1987 BSI Dinner Attendees (not available at this time)

Ticket to the Saturday Cocktail Reception (digitized images at Harvard)
One page. Sequence 117.