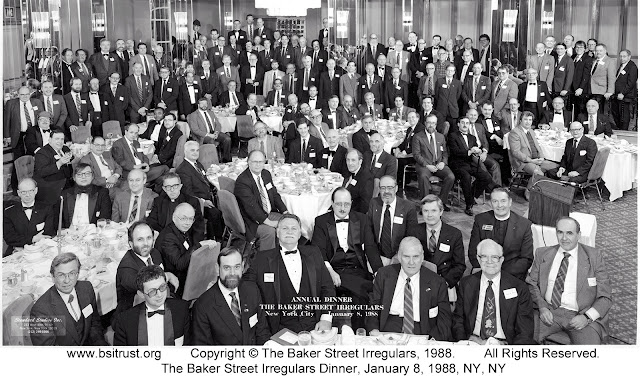 New York January weather proved traditionally fearsome on the occasion of the Master’s 134th birthday, but inside 24 5th Avenue, “Sherlockian conviviality rewarded those who had braved both wind and snow to attend.” Maureen Green became the first Canadian to be fêted as “The Woman.” All traditional Sherlockian rites and rituals were observed. Several distinguished presentations enlightened attendees, including Isaac
Asimov's tuneful toast ("The Battle Hymn of Mrs. Watson"), Ray Betzner's reading of the Musgrave ritual, Richard Schull’s tribute to BSI founder Christopher Morley by rendering Morley’s “In Memoriam Sherlock Holmes,” Peter Blau’s showcasing of an audio-recording of William Gillette performing an entire scene of his play Sherlock Holmes, W. T. Rabe's report on "The Missing Page, or Whatever Happened to Watson's Billet Doux?," David L. Hammer's suggestive discussion of Violet Hunter, and Robert S. Katz's identification of acute septicemic melioidosis as the disease from which Holmes wasn't dying in “The Dying Detective."  Eight Irregulars were invested.

It was noted that the Adventuresses of Sherlock Holmes (ASH) this year was celebrating that group’s 20th anniversary at their dinner.

The following day’s cocktail party featured the “now-classic Friends of Bogie’s theatrical review of Canonical tales.” This performance showcased Loren D. Estleman's "Dr. and Mrs. Watson at Home" from The New Adventures of Sherlock Holmes. The occasion also witnessed the announcement of The Commissionaire’s Award, established in honor of Julian Wolff, esteemed Commissionaire Emeritus, and designated to be presented to Sherlockians (male or female, Irregulars or not) who “have labored far beyond the call of duty in keeping green the Master’s memory.”

Investitures:
Philip R. Brogdon as John Sanger
James C. Cleary Jr. as Howard Garrideb
William R. Cochran as Murray
Carey Cummings as An Irish Secret Society
*John Gardner as Moriarty
Charles A. Meyer as Adolph Meyer
Alan C. Olding as Cooee
Mel Ruiz as Jack Douglas
Burt Wolder as The Third Pillar from the Left
* received Investiture at another event during the year
What is an Investiture?

The Woman:
Maureen Green Van der Flaes
What is The Woman honour?

"Stand with me here upon the terrace..."
(as named at this Dinner, not their year of passing)
Not listed in the 1988 BSJ report.
What is the origin of “standing on the terrace?”

List of 1988 BSI Dinner Attendees (not available at this time)