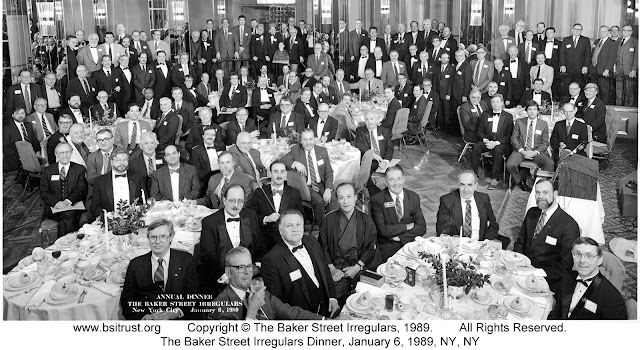 The Baker Street Irregulars enjoyed the distinct pleasure of celebrating the Master’s birthday on the “traditionally accepted” date of January 6. Karen A. Johnson was celebrated as The Woman. Seven Irregulars were invested. The proceedings included a greeting to the Irregulars by Dr. Tsukasa Kobayashi, founder of The Japan Sherlock Holmes Club with his wife Akane Higashiyama; the Japan Sherlock Holmes Club, founded in 1977 with only two members (Dr. and Mrs. Kobayashi), now boasts 1,200 members and “is the largest Sherlockian society in the world.” The evening also featured Joe Fink's fervent defense of Tonga, Philip Shreffler's illustrated series of "Lessons in Canonical Villainy", and Jon Lellenberg's report on the current (and possibly future) Canonical content of the Oxford English Dictionary. Also on the program was a “special presentation of The Murray Award for conspicuous heroism” to Robert Thomalen.

Investitures:
Richard M. Caplan as Dr. Jackson
Andrew Joffe as Sir Charles Hallé
Brad A. Keefauver as Winwood Reade
Jack D. Key as Pritchard
Tsukasa Kobayashi as Baritsu
M. Kenneth McQuage as The Plumstead Marshes
Alvin E. Rodin as Palmer
* received Investiture at another event during the year
What is an Investiture?

The Woman:
Karen L. Johnson (Mrs. Philip A. Shreffler)
What is The Woman honour?

"Stand with me here upon the terrace..."
(as named at this Dinner, not their year of passing)
Not listed in the 1989 BSJ report.
What is the origin of “standing on the terrace?”

List of 1989 BSI Dinner Attendees (not available at this time)

The Sign of the Four; Or, the Problem with the Sholtos (digitized image at Harvard)
Four pages from Conan Doyle's pocket diaries, referring to The Sign of Four, by Richard Lancelyn Green, distributed at the 1989 BSI Dinner.
Two pages. Cover and interior. Sequence 126-127

Ticket to the Annual Sherlockian Cocktail Party on January 7, 1989 (digitized image at Harvard)
One page. Sequence 123