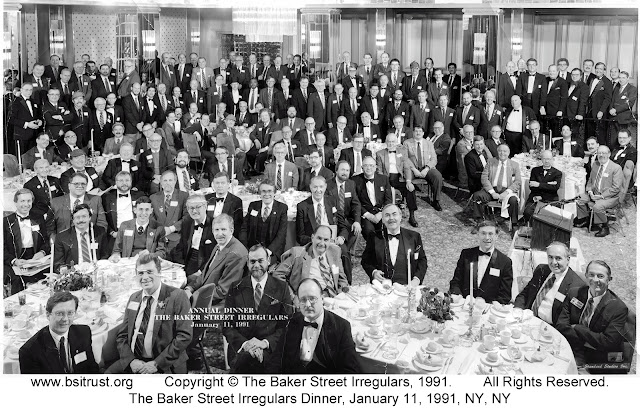 The 137th anniversary of the Master’s birth included all of our traditional rites and ceremonies. Joan [Mrs. Benton] Wood was honored as The Woman. The busy program featured John Bennett Shaw’s paean to the late Commissionaire, Dr. Julian Wolff, read in Mr. Shaw’s absence by Richard Schull. Robert N. Brodie mused on “what ever happened to” a number of well-known Canonical characters. Don Yates proffered two reader’s digested versions of The Hound of the Baskervilles (one sixty seconds long, the other five words long), and Wayne Swift essayed a portion of his ongoing scholarship concerning Silver Blaze. Bill Rabe acquainted members with the shocking results of his investigations into the BSI’s unofficial anthem, “Aunt Clara” (proving that all these years we’ve been singing it to the wrong tune — a Scottish folk song called “Mush Mush”). Norman Davis plunged the “art” of the pun to a new nadir in his survey of Sherlockian horse-racing handicapping. Don Redmond was given The Good Old Index Award honoring his 21 years of indexing of the Baker Street Journal. David Musto gave a lucid account of the founding of the first Sherlockian society in the Soviet Union, The Red-Headed League of Moscow, a long-awaited event in which Mr. Musto lent a gently guiding hand. The report in the BSJ states, “The Baker Street Irregulars wish every good fortune to these new-found Soviet friends.”

However, 1991 will forever be remembered in the annals of BSI history for the Sherlockian Cocktail Party on the following day.  At the Cocktail Party, Tom Stix formally opened the BSI to women in announcing seven additional BSI Investitures, six of whom were women.  His emotional announcement can be heard below.  Two of these Investitures went to Katherine McMahon (one of the original solvers of the Sherlock Holmes Crossword Puzzle) and Edwin V. King (who had earned the honor in the 1940s).  Next, he bestowed an Investiture on Dame Jean Conan Doyle (Arthur Conan Doyle’s daughter).  Stix then went on to invest Edith Meiser, Julia Carlson Rosenblatt, Evelyn Herzog, and Susan Rice.  He ended his moving presentation by emphasizing that these were genuine Investitures in the Baker Street Irregulars, entitling the women to invitations to the Annual Dinner.  His announcement was interrupted by several standing ovations. History had turned, and the BSI Dinner was now co-ed.

Also at the Sherlockian cocktail party, the Commissionaire’s Award for outstanding contributions to Sherlockiana was conferred upon H. George Fletcher who, in his capacity of Director of Fordham University Press, had served for sixteen years as publisher of the Baker Street Journal and of a number of important Sherlockian books including the first volumes of the Baker Street Irregulars’ History Project. (See the 1988 BSI Dinner for background on this award.)

The Woman:
Joan [Mrs. Benton] Wood
What is The Woman honour?

"Stand with me here upon the terrace..."
(as named at this Dinner, not their year of passing)
Not listed in the 1991 BSJ report.
What is the origin of “standing on the terrace?” 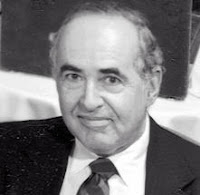 Thomas Stix at a BSI Dinner

Thomas L. Stix, Jr. (The Norwood Builder) became the head of the BSI (Wiggins) after the 1986 BSI Dinner.  He served in that capacity until 1997.  At the 1991 Sherlockian Cocktail Party on the day after the 1991 BSI Dinner, Stix invested six women into the BSI to great applause.  He said that, henceforth, female BSI would be invited to the Annual Dinner. You can hear his moving presentation in this 12-minute vignette from the 1991 Sherlockian Cocktail Party.  Stix (whose father was also a BSI member) was invested at the 1961 BSI Dinner.

Recordings of both the 1991 BSI Dinner and Sherlockian Cocktail Reception are available at Harvard as part of the BSI Archive.

Ticket to the Annual Sherlockian Cocktail Party on January 12, 1991 (digitized image at Harvard)
One page. Sequence 140

I Hear of Sherlock Everywhere, Episode 89: The Adventuresses of Sherlock Holmes
In this episode of their podcast, W. Scott Monty, BSI and Burt Wolder, BSI interview Evelyn Herzog, ASH, BSI and Susan Rice, ASH, BSI (both among the first women invested in the BSI in 1991) about the events leading up to the admittance of women in the BSI.  This link goes directly to the point in the podcast when they talk about the 1991 Sherlockian Cocktail Party and Tom Stix’s announcement.