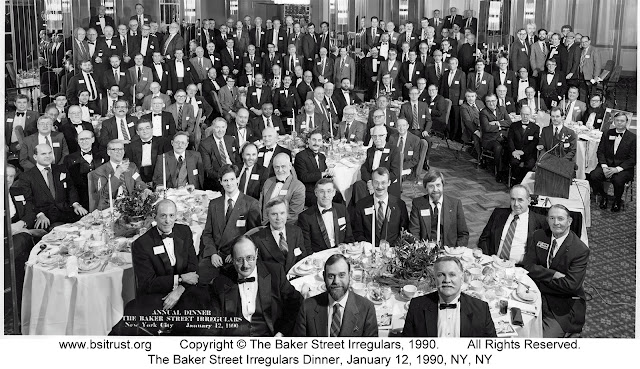 The 136th anniversary of the Master’s birth was resolutely “observed without scruple”— including Robert Katz delivering another of his toasts to “The Second Mrs. Watson.”  Eleanor Sullivan was honored as The Woman. The evening’s lively program opened with the Baker Street Journal’s publisher, George Fletcher, speaking on “Copyrights and Copywrongs” regarding the intellectual property status of the BSJ’s contents. There were also presentations by Al Rodin (on Joseph Bell, testicles, sex, and syphilis), Jon Lellenberg (on the BSI archival history project), David Musto (on his role in founding a Sherlockian society at the Great Wall Station in the Antarctic), Ed Vatza (on the Canonicity of "The Blanched Soldier"), and Al Rosenblatt (on Sherlock Holmes' amorous walks). Seven Irregulars received their Shillings.

This Dinner had actually been intended to be even more momentous than it was.  Tom Stix had invited Lisa McGaw (who received the BSI Investiture of Mrs. Hudson in 1982) to attend the 1990 BSI Dinner, and she was planning on attending. She would have been the first woman to attend a BSI Annual Dinner.  Unfortunately, Lisa McGaw suddenly passed away in December 1989.   She was to have been a recipient of the Two-Shilling Award, and it was given to her posthumously.  Two other recipients received the Two-Shilling Award that year, Richard D. Lesh and W.T. Rabe.   The proceedings concluded on another moving note with Philip Brogdon’s rendition of P.M. Stone’s “Sherlock Holmes.” “[T]ears edged the eyes of all but those with the hardest of hearts.”

At the Sherlockian Cocktail Party on the following day, Dorothy Beverly West and Katherine McMahon were awarded the Queen Victoria Medal (in absentia) (see the 1969 Dinner for background on the Medal). The report on the weekend in the BSJ notes that they are “the last known surviving individuals submitting correct solutions to the crossword puzzle…used by Christopher Morley in 1934 as the criterion for membership in the Baker Street Irregulars.”  In addition, the Commissionaire’s Award for outstanding contributions to Sherlockiana was conferred upon Henry Lauritzen, long the “sparking plug” of the Sherlock Holmes Klubben i Danmark (see the 1988 Dinner for background on this award).

Investitures:
Charles A. Adams as The Winter Assizes at Norwich
Allen Mackler as Sarasate
Austin J. McLean as The London Library
Frederick C. Page as The Arcadia Mixture
Milton F. Perry as Nathan Garrideb
Donald K. Pollock as The Anthropological Journal [resigned]
Tom Stetak as The Head of the Police at Cleveland
* received Investiture at another event during the year
What is an Investiture?

The Woman:
Eleanor Sullivan
What is The Woman honour?

"Stand with me here upon the terrace..."
(as named at this Dinner, not their year of passing)
Not listed in the 1990 BSJ report.
What is the origin of “standing on the terrace?”

List of 1990 BSI Dinner Attendees (not available at this time)