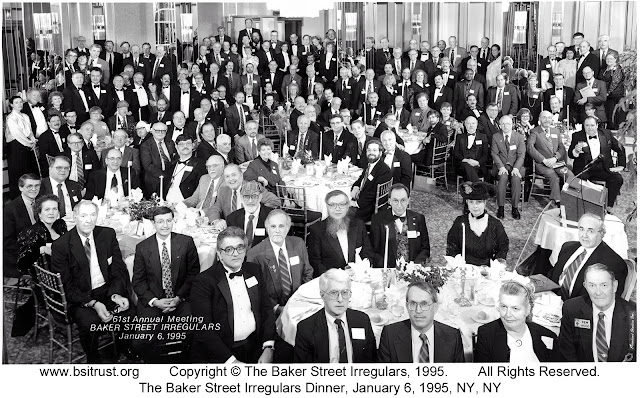 The Dinner celebrating the 141st anniversary of the Master’s birth boasted a diverse slate of presentations, including Marina Stajic’s “put-‘em-on-one-at-a-time” presentation on Victorian undergarments; Paul Herbert’s report on two Sherlockian films that never made it from script to screen; Tom Stetak’s discussion of Canonical lawn ornaments (which might well have been subtitled “beware the deadly sundial”); David Stuart Davies’s well footnoted report; and Sherry Rose-Bond’s toast to the “Second Most Dangerous Man in London” (not who one might think!).

Myrtle T. Robinson was honored as “The Woman.” Eight Irregulars received their shillings. Dr. Robert S. Katz was honored with the Two-Shilling Award.

At the next day’s Sherlockian Cocktail Reception, William R. Cochran, editor of The Baker Street Journal announced that the Morley-Montgomery Memorial Award (established by Lew David Feldman in 1958 for the best contribution to the BSJ) has been revived. The author of the best paper published in 1995 will receive a prize of $500 during the 1996 BSI Weekend.

Investitures:
David Stuart Davies as Sir Ralph Musgrave
Thomas J. Francis as The Imperial Opera of Warsaw
Theodore Friedman as The Commonplace Book
Marina Stajic as Curare
Dante M. Torrese as Von Herder
Gerald N. Wachs as Godfrey Emsworth, changed to Sir James Saunders
Kathryn White as The Musgrave Ritual
Ronald S. White as The Cabinet Photograph
* received Investiture at another event during the year
What is an Investiture?

The Woman:
Myrtle T. Robinson
What is The Woman honour?

A recording of portions of the 1995 BSI Dinner is available at Harvard as part of the BSI Archive.