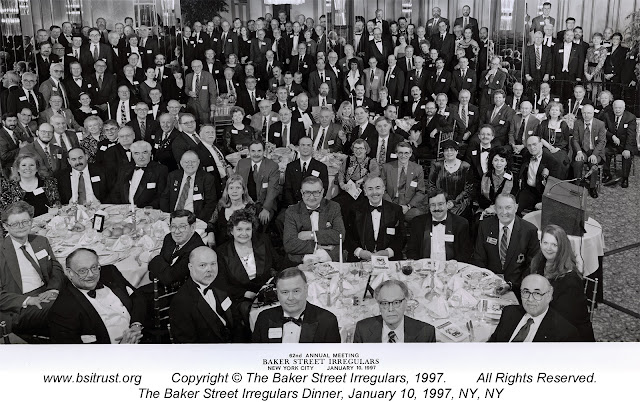 The Dinner celebrating the 143rd anniversary of the Master’s birth was a momentous one.  The usual traditions and toasts were performed, including the Sherlock Holmes Prayer, the reading of the BSI Constitution and Buy-Laws, and the reciting of the Musgrave Ritual.

Robert Katz once again toasted The Second Mrs. Watson, William Hyder toasted Mycroft Holmes, Susan Rice toasted Mrs. Hudson, and Sherry Rose-Bond ended the formal toasts with one to “The Most Dangerous Gang in London.”  Bruce Montgomery regaled the crowd with his father’s “Aunt Clara” and his own set of new verses.

Tom Stix then turned the program over to Mike Whelan, who emceed a riotously funny roast of Tom. Mike Whelan then presented to Tom and his wife Dorothy two beautiful expressions of the BSI’s gratitude for their work on our behalf.  Dorothy received a crystal vase on which was inscribed “Presented with Affection to Dorothy K. Stix, The The Woman, by the BSI, January 10, 1997.”  Tom received a crystal presentation piece, etched with the alternate dust jacket design for the British edition of The Private Life of Sherlock Holmes by Vincent Starrett (published, appropriately enough, in 1934, the year of the founding of the BSI) inscribed “With gratitude to Thomas L. Stix, Jr., Wiggins, for keeping the memory of the Master green, by the BSI, January 10, 1997.”

Tom Stix announced that he was stepping down after eleven years as Wiggins, and was passing the mantle on to Mike Whelan. (Listen to the recording below.) Dante Torrese closed the program with “A Long Evening with Holmes.”

Beverly E. Wolov was honored as “The Woman.” Eight Irregulars received their shillings.

At the next day’s Sherlockian Cocktail Reception, David Stuart Davies performed The Hound of the Baskervilles in a one-man, seven minute performance.  Philip Shreffler was presented with the Morley-Montgomery Award.  Judge Albert Rosenblatt presented his annual poetic account of the BSI Dinner, the Sherlockian Weekend, and the Sherlockian Year.

Investitures:
William J. Hyder as A Most Valuable Institution
Richard J. Kitts as The Battered Tin Dispatch-Box
Kenneth C. Lanza as His Last Bow
Theodora Niver as Carina
Roy E. Pilot as Chemical Laboratory of St. Barts
Paul G. Singleton as Covent Garden
Margaret Smedegaard as Criterion Bar
Dorothy K. Stix as Martha
* received Investiture at another event during the year
What is an Investiture?

The Woman:
Beverly E. Wolov
What is The Woman honour?

"Stand with me here upon the terrace..."
(as named at this Dinner, not their year of passing)
Not listed in the 1997 BSJ report.
What is the origin of “standing on the terrace?” 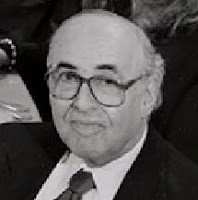 Thomas Stix at the 1997 BSI Dinner

A recording of portions of the 1997 BSI Dinner is available at Harvard as part of the BSI Archive.