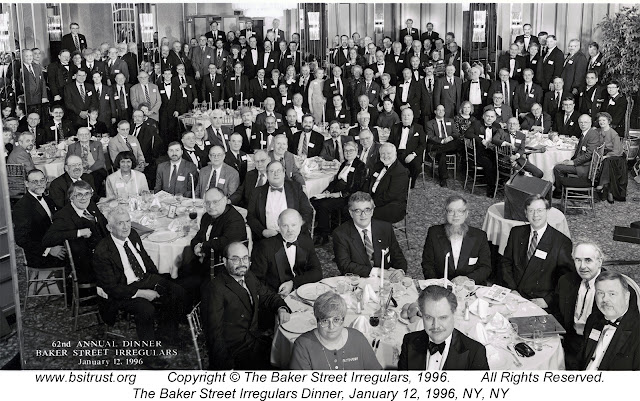 The Dinner celebrating the 142nd anniversary of the Master’s birth included the usual traditions and imaginative toasts.  Tom Stix was at the podium for the dinner, thankfully looking well after a recent illness. Sherry Rose-Bond toasted Peter Steiler the Elder. Robert Katz’s annual toasts to The Second Mrs. Watson have become legendary, and, once again, he did not fail to outrage the attendees.  The theme of the 1996 BSI Dinner was “My collection of M’s is a fine one,” and this was reflected in presentations by Joseph Moran and Shirley Purves. Evelyn Herzog also celebrated Canonical M’s in verse.  Tom Stix announced that Bob Thomalen would be stepping down as Cartwright of the BSI, and Mike Whelan would be filling this position. With the sad loss of the BSI’s secretary, John Bennett Shaw, Tom and Ruthann Stetak will officially take over the title of Simpsons, a role that they had been performing during the past year.

Barbara Herbert was honored as “The Woman.” Eight Irregulars received their shillings. The Queen Victoria Medal was awarded to Robert Thomalen for his work as Cartwright on behalf of the BSI. (See the 1969 BSI Dinner for background on the Medal.)

At the next day’s Sherlockian Cocktail Reception, Margaret Nydell was presented with the Morley-Montgomery Award, the first given since 1980.  Judge Albert Rosenblatt presented his now traditional and always creative poetic account of the BSI Dinner, the Sherlockian Weekend, and the Sherlockian Year.

Investitures:
Steven T. Doyle as The Western Morning News
Ralph Hall as Smack! Smack! Smack!
Hugh T. Harrington as Wisteria Lodge
Peter Horrocks as The Inner Temple
Katherine Karlson as The Evening Standard
John E. Pforr as Police Constable Cook
Marsha L. Pollak as A Small But Select Library
Robert J. Stek as The Mysterious Scientist
* received Investiture at another event during the year
What is an Investiture?

The Woman:
Barbara (Mrs. Paul D.) Herbert
What is The Woman honour?

"Stand with me here upon the terrace..."
(as named at this Dinner, not their year of passing)
Not listed in the 1996 BSJ report.
What is the origin of “standing on the terrace?”

A recording of portions of the 1996 BSI Dinner is available at Harvard as part of the BSI Archive.