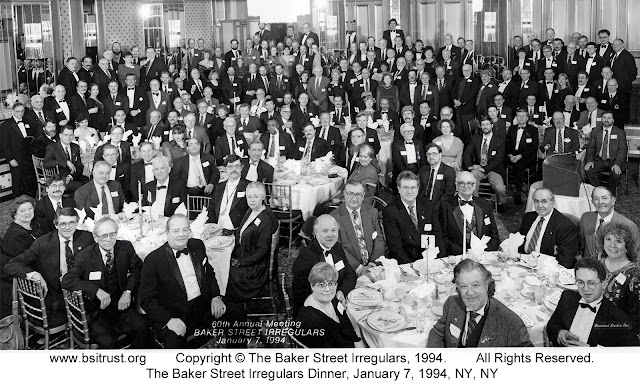 In addition to the 140th anniversary of the Master’s birth, this year marked the 60th anniversary of the founding of the Baker Street Irregulars by Christopher Morley in 1934. In honor of this signal occasion, the birthday weekend was marked by numerous celebrations. The BSI Dinner agenda featured the usual toasts and traditions and Bruce Montgomery's melodic tribute to his grand-aunt Clara and to his father. It then focused on 60 years of BSI history, including George Fletcher's anecdotal history of The Baker Street Journal, Susan Rice and Mickey Fromkin’s survey of Irregular poetry through the decades, Steve Rothman's discussion of the very early meetings of the BSI, and reminiscences of the annual Dinners by David Weiss (a stalwart attendee for more than 40 years). Bill Schweickert's poetic birthday tribute to the Master ended the program.  Theresa (Mrs. Robert E.) Thomalen was honored as “The Woman.” Twelve Irregulars received their Investitures at the Dinner.

At the following day’s reception for all Sherlockians, Catherine Cooke received an Investiture. Eleanor O’Connor received the Queen Victoria Medal in recognition of her many years of assistance at the BSI annual dinners (see the 1969 BSI Dinner for background on the Medal). There were also Jon Lellenberg and Clint Gould's "March of Time" report on the history of the BSI, a performance by Paul Singleton and Philip Brogdon of an excerpt from Jeremy Paul's play "The Secret of Sherlock Holmes," a warm tribute to Tom Stix delivered by Bob Thomalen, and poetic reports by Al Rosenblatt and Marilynne McKay on the events of the previous evening.

This 60th birthday weekend was a fine testament to the reality that, as BSJ editor William Cochran phrased it in his “Editor’s Gas-Lamp” article, “The Irregulars survive because all orders of Sherlockian are as inseparable as Holmes and Watson.”

Investitures:
Catherine Cooke as "The Book of Life"*
Peter J. Crupe as The Noble Bachelor
T. Michelle Fromkin as The Missing Three-Quarter
Anthony D. Howlett as John Hector McFarlane
Donald B. Izban as Market Street
Thomas J. Joyce as A Yellow-Backed Novel
Bruce Montgomery as The Red Circle
Geoffrey S. Stavert as The Shingle of Southsea
Ruthann Stetak as The Camberwell Poisoning Case
Francine Morris Swift as The Wigmore Street Post Office
Hirotaka Ueda as Japanese Armour
Thomas D. Utecht as Arthur Charpentier
William H. Vande Water as An Enlarged Photograph
* received Investiture at another event during the year
What is an Investiture?

The Woman:
Theresa Thomalen
What is The Woman honour?

"Stand with me here upon the terrace..."
(as named at this Dinner, not their year of passing)
Not listed in the 1994 BSJ report.
What is the origin of “standing on the terrace?”

A recording of portions of the 1994 BSI Dinner is available at Harvard as part of the BSI Archive.