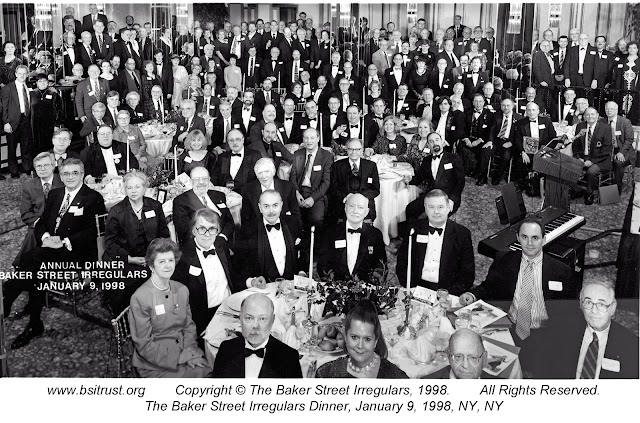 The Dinner celebrating the 144th anniversary of the Master’s birth featured a wealth of diverse presentations and toasts. Among the array of familiar names in the latter, were Mrs. Hudson (by Marsha Pollak), Mycroft Holmes (by Donald Izban) (see Related Material), Watson’s Second Wife (by Steven Rothman), and Sherlock Holmes (by Donald Yates).

Mike Whelan, presiding over his first BSI Dinner as Wiggins, resurrected the old tradition of including a toast to “An Old Irregular,” this year given touchingly by Judge Andrew Peck to William S. Baring-Gould (see Related Material). Bruce Montgomery and members of the Penn Glee Club performed selections from the late Harvey Officer's Sherlockian songbook.  Fritz Sonnenschmidt provided a demonstration of just how a master chef prepares pheasant livers with orange on toast points.

At the next day’s Sherlockian Cocktail Reception, Susan Rice received the Morley-Montgomery Award for her piece entitled “Watson’s Hidden Addiction.”  Judge Albert Rosenblatt presented his now traditional and always creative poetic account of the BSI Dinner, the Sherlockian Weekend, and the Sherlockian Year.

The BSJ’s report ends by affirming: “This was Mike Whelan’s first BSI dinner as “Wiggins” and it was judged by all to be a magnificent success. Congratulations to Mike; we look forward to many more.”

Investitures:
John F. Baesch as State and Merton County Railroad
Pamela Bruxner as The British Government*
Susan Z. Diamond as The Great Mogul
Masamichi Higurashi as Baron Adelbert Gruner*
Lou Lewis as William Whyte
Ronald Mansbridge as A Case of Identity
Thierry Saint-Joanis as Monsieur Bertillon
James E. Smith II as Winner of the Jackson Prize
* received Investiture at another event during the year
What is an Investiture?

The Woman:
Mary Schulz
What is The Woman honour?

"Stand with me here upon the terrace..."
(as named at this Dinner, not their year of passing)
Stafford G. Davis (Horace Harker, 1980)
Dame Jean Conan Doyle (A Certain Gracious Lady, 1991)
Orval C. Graves (Whitaker's Almanack, 1982)
Robert G. Harris (The Creeping Man, 1952)
Constance Montgomery (The Woman, 1961, Wife of James Montgomery)
Donald P. Musgrave (Reginald Musgrave, 1976)
Eleanor Wolff (The Woman, 1965, Wife of Julian Wolff)
What is the origin of “standing on the terrace?”

List of 1998 BSI Dinner Attendees (not available at this time)

A recording of portions of the 1998 BSI Dinner is available at Harvard as part of the BSI Archive.

The Musgrave Ritual (digitized images at Harvard)
Distributed to attendees at the 1998 BSI Dinner. Recited at the 1998 Dinner by Paul Singleton.
One Page. Sequence 171.