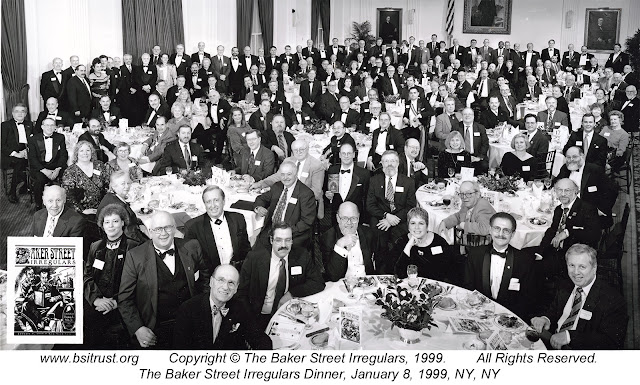 The Dinner celebrating the 145th anniversary of the Master’s birth began with the “surprise presence of New York Governor George Pataki,” who was greeted with effusive applause. He had recently appointed Albert Rosenblatt to the Court of Appeals and had presided over Judge Rosenblatt’s swearing-in ceremony. Governor Pataki was the first state governor to attend a BSI annual dinner, though it was noted that New York Governor Franklin Delano Roosevelt had been a Sherlockian and had gone on to serve as President of the United States. Peter Blau’s account of the Dinner (see Reports on the Dinner) notes that “the governor did not seize the opportunity to announce his future plans.”

A lively debate on the favorite and least favored stories in the Canon was moderated by Judge Albert Rosenblatt.  The debaters included George McCormick, Susan Rice, David Stuart Davies, and Andrew Fusco. Robert Katz gave a stirring remembrance of Tom Stix, who had passed away the previous year.  Tom had led the BSI for eleven years, taking over from Julian Wolff just after the 1986 BSI Dinner and announcing his retirement at the 1997 BSI Dinner.

Deborah Fusco was honored as The Woman. Five Irregulars received their Shilling.

At the next day’s Sherlockian Cocktail Reception, Jon Lellenberg received the Morley-Montgomery Award for his Baker Street Journal Christmas Annual on “’Entertainment and Fantasy': The 1940 BSI Dinner.”  Beverly Wolov read a poem in honor of “The Woman.” Jay and Trish Pearlman displayed their miniature reproduction of the sitting room at 221B.  Judge Albert Rosenblatt presented his now traditional and always creative poetic account of the BSI Dinner, the Sherlockian Weekend, and the Sherlockian Year.

Investitures:
William Dorn as The Newgate Calendar
H. Paul Jeffers as Wilson Hargreave
June L. Kinnee as Miss Hatty Doran
Leslie S. Klinger as The Abbey Grange
Marilyn MacGregor as V.V. 341
* received Investiture at another event during the year
What is an Investiture?

The Woman:
Deborah Fusco
What is The Woman honour?

List of 1999 BSI Dinner Attendees (not available at this time)

A recording of portions of the 1999 BSI Dinner is available at Harvard as part of the BSI Archive.

The Musgrave Ritual (digitized images at Harvard)
Distributed to attendees at the 1999 BSI Dinner. Recited at the 1999 Dinner by Shirley Purves.
One Page. Sequence 184.