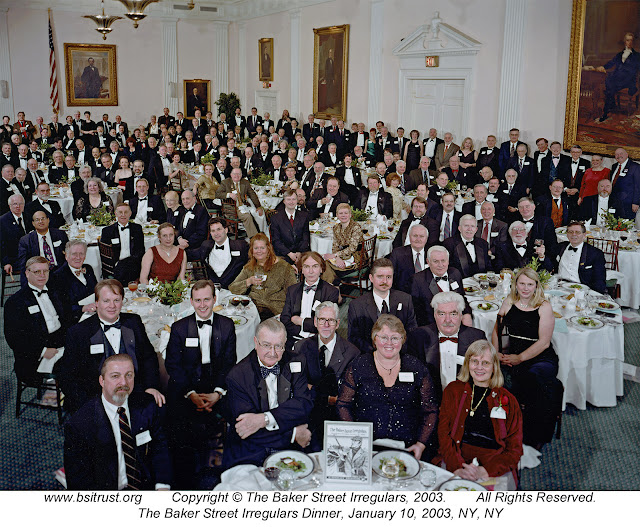 At the beginning of the celebration of the 149th birthday of Sherlock Holmes, Wiggins welcomed several noteworthy attendees to the dinner, including Janet Hutchings, editor of Ellery Queen Mystery Magazine.

The Buy-Laws were read by Joseph Coppola.  Mark Gagen gave the toast to Mrs. Hudson.  Richard Sveum had us "stand or sit and salute Sherlock's sibling," Mycroft.  Julie McKuras raised her glass to Watson's second wife. Bill Vande Water toasted Howard Haycraft, who, among his many accomplishments, holds the distinction as the only Irregular to have a work appear in a Basil Rathbone/Nigel Bruce feature. Haycraft’s book Murder for Pleasure: The Life and Times of the Detective Story is visible on the shelves in The House of Fear (1945).

Bill Hyder chose to believe that Holmes did travel to Tibet and Mecca, and he reported on what everyone else was doing while Holmes was away. Philip Shreffler and Mary Ellen Rich enacted Holmes' dealings with a thoroughly confused travel agent arranging his itinerary for the Great Hiatus.  Marilynne McKay explained the Great Hiatus through the contents of diaries and letters of women, most likely Adventuresses.  Though Dorothy L. Sayers was the first to use the term "the game" for the study of Sherlock Holmes, Marina Stajic and Paul Singleton showed us what would have happened if Christopher Morley had called a game manufacturer.  Iry Kamil resumed the difficult job of Standing upon the Terrace and remembering those whom we have lost.

Janice Fisher was fêted as The Woman. Six stalwart Irregulars received their Shillings. The Two-Shilling Award was presented to Donald E. Novorsky.

At the next day’s Sherlockian Cocktail Reception, Janice Fisher introduced The Women, her predecessors who were in attendance.  Judge Albert Rosenblatt and his daughter Betsy Rosenblatt, once again, performed their remarkable summation of the previous year and of the Festivities in verse.

Investitures:
Ed Christenson as Antonio
Joseph A. Coppola as The Stranger's Room
David Greeney as Uncle Ned
Alexian A. Gregory as The Grimpen Postmaster
Mia Stampe Lagergaard as The Dynamics of an Asteroid
Susan Vizoskie as Mrs. Saunders
* received Investiture at another event during the year
What is an Investiture?

The Woman:
Janice Fisher
What is The Woman honour?

"Stand with me here upon the terrace..."
(as named at this Dinner, not their year of passing)
Kenton A. Johnson (A Remarkable Invention, 1981)
Frederick C. Page (The Arcadia Mixture, 1990)
Geoffrey S. Stavert (The Shingle of Southsea, 1994)
Eve Titus (Young Master Rucastle, 1993)
Don Werby (Old Abrahams, 1986)
What is the origin of “standing on the terrace?”

List of 2003 BSI Dinner Attendees (not available at this time)

The BSI Archive does not have a recording of the 2003 BSI Dinner at this time.  If you have one or know where one exists, please contact the Chair of the Trust.