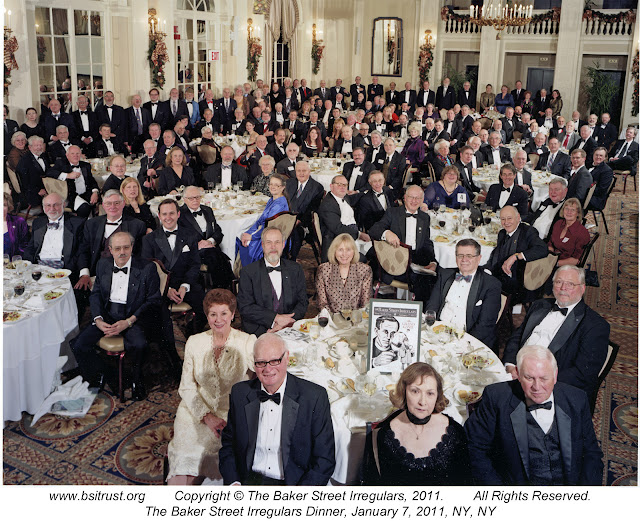 The dinner celebrating Sherlock Holmes’s 157th birthday was an evening of recognition, celebration, and scholarship.  There was a distinct “Knoxian” theme.

Wiggins (Michael Whelan) began the evening by thanking the following members for their volunteerism in performing a variety of important tasks that had benefited the BSI: Michael Dirda, George McCormack, Irving Kamil, James Saunders, and Donald Terras.  Wiggins also thanked the following for their contributions to the BSI publishing effort: John Bergquist, Steve Rothman, Steve Doyle, Mark Gagen, Randall Stock, and Michael Kean. He also thanked Maggie Schpak for her design of BSI medals.  Mike introduced four attendees who have been members of the BSI for 50 years or more: George McCormack (50 years), Russell Merritt (51 years), Peter Blau (52 years), and Arthur Levine (56 years).  Each of them was presented with a plaque to commemorate the occasion.

John Linsenmeyer enlightened us about Monsignor Ronald Knox, acknowledging that Knox deserves to be considered the founder of the Grand Game.  Sarah Montague, Andrew Joffe, and Paul Singleton performed an imaginative, and amusing, heavenly meeting between the spirits of Conan Doyle (Joffe) and Dorothy L. Sayers (Montague), interspersed with brief conversations between their famous characters, Sherlock Holmes and Lord Peter Wimsey (Singleton).  James Zych, winner of the BSI essay contest, delivered his paper (see Related Material, below).  Les Klinger presented his interview with Robert Downey, Jr.  Nick Utechin offered a toast to an Old Sherlockian, Ronald Knox, and revealed the very recently discovered details of Knox’s elusive third reading of his paper at Oxford (see Related Material, below). Henry Boote had written Knoxian lyrics to the music of “It’s the Hard-Knock Life” from Annie and, accompanying at the piano, led us in singing this rendition and then in singing the BSI’s anthem, “Aunt Clara.”  Francine Kitts, once again, performed a moving “Standing upon the Terrace” ceremony, remembering those whom we have lost.

Gail Postal was toasted as The Woman.

Burt Wolder concluded the evening’s program with his recitation of Vincent Starrett’s “221B.”

At the next day’s Sherlockian Cocktail Reception at the New York City Bar Association, Judge Albert Rosenblatt and his daughter, Betsy Rosenblatt, once again performed their remarkable rhyming summation of the previous year and of the Festivities.  In addition, Mike Whelan presented Candace Lewis (The Woman, 2007) with an Eddy for her editorial work on Two Celebrations. The afternoon’s program concluded with a musical offering arranged by Lyndsay Faye from the musical adaptation of her Sherlockian pastiche Dust and Shadow (by Jonathan Howard, with music by Jonathan Reid Gealt, lyrics by Dustin Sullivan, and book by Kasey Marino).

Key to People in the 2011 BSI Dinner photo (not available at this time, but see the 2011 Table Seat Assignments (PDF)

Investitures:
Vincent Brosnan as That Gap on That Second Shelf
Terence Faherty as Sir Charles Baskerville
Lyndsay Faye as Kitty Winter
Frank Ferry as Dr. Leon Sterndale
David W. Houle as The British Museum
Peggy Perdue as Violet Westbury
* received Investiture at another event during the year
What is an Investiture?

The Woman:
Gail Postal.
What is The Woman honour?

A recording of portions of the 2011 BSI Dinner is available at Harvard as part of the BSI Archive.