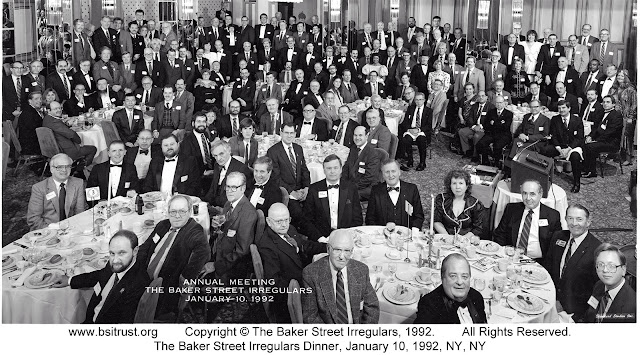 The 138th anniversary of the Master’s birth provided ample evidence—if any were still required at this juncture—of the global appeal of Sherlockiana and Sherlockian scions. Irv Kamil reported on The Asian Travelers, a new Sherlockian society founded the previous year at  the Great Wall of China, and visitors from France (Jean-Pierre Cagnat) and Japan (Yuichi Hirayama and Hirotaka Ueda) were introduced.

Steve Rothman showcased a treasure: a rare audio recording of Christopher Morley speaking about Sherlock Holmes and reading from “The Adventure of the Dying Detective.” Ely Liebow discussed the Sherlockian aspects of "The $64,000 Question" (the 1956 television quiz show). The program also included Edward Vatza's discussion of "The Gloria Scott", and Joseph Fink's investigative report on Dr. Watson's marital affairs. Bruce Montgomery led the assembled in singing “Aunt Clara” and followed this with his own “Father’s Folly, or Aunt Clara Revisited.” Dr. Hirayama then rendered the chorus of “Aunt Clara” in his native Japanese; subsequently, Don Yates did the same in Spanish. The Baker Street Journal notes: “This might have gone on, getting really problematical, but it didn’t.”

Margaret Walsh was celebrated as “The Woman.” Five new Irregulars were invested at the Dinner.  Two more received their Irregular Shillings at the Sherlockian Cocktail Party the following day.

At the Sherlockian Cocktail Party on the following day, Theresa Thomalen was awarded the Queen Victoria Medal (see the 1969 BSI Dinner for background on the Medal). Peter Blau expertly presided over the Sherlockiana auction which raised $610 for the BSI’s Dr. John H. Watson Fund, which offers financial assistance to Sherlockians (membership in the BSI or the ASH is not required) who might otherwise be unable to participate in the weekend's festivities. The proceeding also included a raffle which featured a bottle of Madeira (1934 vintage) donated to the Dr. John H. Watson Fund by Patricia Guy.

Revised Key to People in the 1992 BSI Dinner Photo (PDF)

The Woman:
Margaret Walsh
What is The Woman honour?

"Stand with me here upon the terrace..."
(as named at this Dinner, not their year of passing)
Charles Goodman (The Stockbroker's Clerk, 1991)
Michael Hardwick (The Sign of the Four, 1985)
Michael Harrison (The Camberwell Poisoning Case, 1964)
Howard Haycraft (The Devil's Foot, 1992)
Henry Lauritzen (The Royal Family of Scandinavia, 1961)
Edward A. Merrill (Palladio, 1972)
Lenore Glen Offord (The Old Russian Woman, 1958)
William Passen (The Camberwell Poisoning Case, 1955)
Milton Perry (Nathan Garrideb, 1992)
Sylvia Porter (The Woman, 1957)
Ake Runnquist (Jacob Shafter, 1991)
Eleanor Sullivan (The Woman, 1990)
What is the origin of “standing on the terrace?”

List of 1992 BSI Dinner Attendees (not available at this time, but see Key to the Photo, below)

Revised Key to People in the 1992 BSI Dinner Photo (PDF)

A recording of the 1992 BSI Dinner is available at Harvard as part of the BSI Archive.

Name Tag from the 1992 BSI Dinner (digitized images at Harvard)
One page. Sequence 145

Ticket to the Annual Sherlockian Cocktail Party on January 11, 1992 (digitized image at Harvard)
One page. Sequence 146

Rose, Lloyd, “To Women, A Mystery No More,” The Washington Post (January 13, 1992)
Lloyd Rose, at the time, the Chief Drama Critic at the Washington Post, wrote about her attendance at the 1992 BSI Dinner.