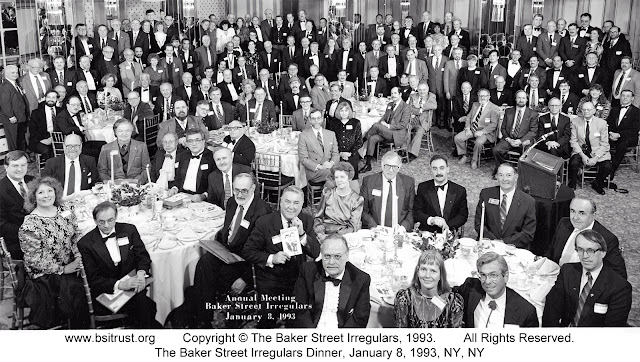 The 139th anniversary of the Master’s birth featured the standard repertoire of toasts and traditions. Steven Rothman toasted the second coming of Watson's first wife, followed by Robert Katz's promise of a rebuttal next year. Attendees were treated to a bevy of diverse presentations, including Ralph Hall's expert discussion of Canonical insects, Joseph Fink's narration of the rise and fall of Professor James Moriarty, and a tribute by Robert Mangler and Robert Hahn to Vincent Starrett.

Mary Ann Bradley was honored as “The Woman.” Six Irregulars received their Shilling.

At the following day’s Sherlockian Cocktail Party, Philip Shreffler received the Queen Victoria Medal (see the 1969 BSI Dinner for background on the Medal) in recognition of his dedication as the Baker Street Journal editor.

Investitures:
Jean-Pierre Cagnat as The Bank of France
Shirley Dickensheet as Ivy Douglas
Joseph J. Eckrich as The Stockbroker's Clerk
Yuichi Hirayama as The Japanese Vase
Alfred A. Levin as Abe Slaney
Eve Titus as Young Master Rucastle
* received Investiture at another event during the year
What is an Investiture?

The Woman:
Mary Ann Bradley
What is The Woman honour?

A recording of the 1993 BSI Dinner is available at Harvard as part of the BSI Archive.

Ticket to the Annual Sherlockian Cocktail Party on January 9, 1993 (digitized image at Harvard)
One page. Sequence 151