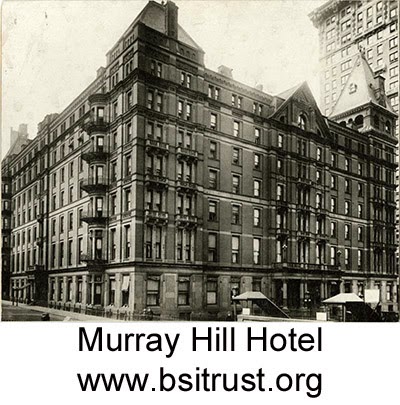 Edgar W. Smith made sure that the BSI Dinner became an annual event.  Forty one people attended, including Frederick Dannay (one half of the “Ellery Queen” mystery writing team), Richard Gordon (who acted as Holmes on the radio), and the novelist Henry Morton Robinson.  Toasts were drunk to The Woman, Mrs. Hudson, Mycroft, and Doctor Watson’s Second Wife. The BSI’s Constitution was read.  Harvey Officer led the group in an anthem entitled “The Road to Baker Street.” Julian Wolff spoke on Dr. Watson’s wounds.  Peter Greig delivered a paper on “Holmes, the Epicure.” Richard Gordon, who played Holmes on the radio, spoke on his identification with Holmes.  Henry Morton Robinson read a paper under the pen-name Joel Sayre.  Earle Walbridge spoke on the Baker Street Bibliography. Belden Wiglesworth read a “Ballad of Baker Street.” Robert Keith Levitt spoke on “Holmes the Ballistician.”  Frederick Dorr Steele discussed the days that are gone.

The photo of the Murray Hill Hotel on this page is part of the collection of the City University of New York. Graduate School and University Center.

The Woman:
Edith Meiser
What is The Woman honour?

The Trust does not have a 1942 Dinner Menu.  If you have a copy, or even a scan of one, please contact us.