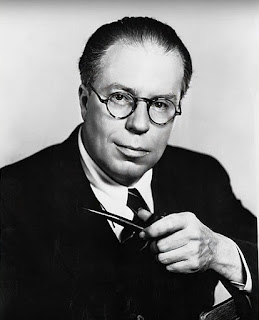 Christopher Morley (The Sign of the Four, 1944) founded The Baker Street Irregulars in 1934. He started his first Sherlockian club at the age of 12, attended Oxford on a Rhodes scholarship, and produced his first bestselling novel in 1917.
Besides writing novels, Morley was a newspaper columnist and a contributing editor of the Saturday Review of Literature. His notes about Holmes and the BSI in the SRL reached a national audience, and commemorated the first official meeting of the BSI in 1934.
As the titular head of the BSI, Morley organized the first two BSI Dinners and presided at many others.  Christopher Morley, Vincent Starrett, and Edgar W. Smith played key roles in establishing the BSI and the study of Sherlock Holmes.
* * *
Steve Rothman (The Valley of Fear, 1986 ) is a leading authority on Christopher Morley.  Rothman edited The Standard Doyle Company: Christopher Morley on Sherlock Holmes (1990). He has served as editor of the Baker Street Journal since 2000.
His video interview about Christopher Morley first appeared on YouTube on March 5, 2021.
Test

The 1944 BSI Dinner
Christopher Morley received his Investiture in 1944 and his certificate at the 1945 BSI Dinner.
The 1958 BSI Dinner
Christopher Morley died in March 1957 and was honored at the 1958 BSI Dinner.
A Brief History of the BSI
Morley's role in the founding of the BSI
Morley Letter to Edgar W. Smith
See an example of a Morley letter from Christmas 1949
Christopher Morley Letters
The BSI Archive holds letters from Morley to Edgar W. Smith, and letters from Smith to Morley.
Material in the BSI Archive may be used by any qualified scholar, subject to the normal rules and regulations of the library. For links to a detailed finding aid and related information, see our BSI Archive page.
Page composed on 3/5/21 by Randall Stock
This page last updated 3/6/21 by Randall Stock
Ignore this placeholder