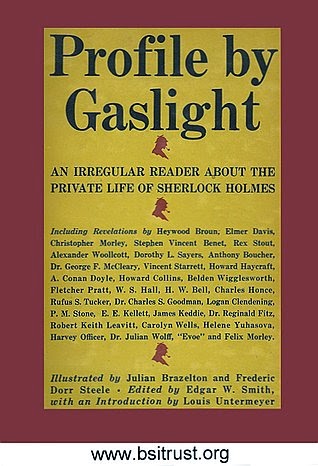 The BSI gathered again in 1944, and investitures were awarded for the first time.  Thirty-eight people attended, including James Bliss Austin (a vice president of U.S. Steel), tenor James Montgomery, and bookman John Carter.  Leslie Marshall read a Fragment from “The Man who was Wanted,” a short story attributed incorrectly to Arthur Conan Doyle. Harvey Officer played his “Baker Street Suite for Violin and Piano.”   David Randall read a paper on “The Adventure of the Notorious Forger.”  James Keddie, Jr. Spoke about Billie, the boy who minded the door at Holmes’ residence.  Edgar Smith distributed copies of his Baker Street Inventory, a bibliography of Sherlockian writings.  Selected portions of the upcoming book Profile by Gaslight were read.  James Bliss Austin spoke on the nature of the J. H. Watsons.

The photo on this page of the cover of Edgar W. Smith's Profile by Gaslight is courtesy of Andrew Solberg.

Investitures:
James Bliss Austin as The Engineer's Thumb*
Laurence P. Dodge as The Six Napoleons*
William S. Hall as The Blue Carbuncle*
Charles Honce as The Empty House*
Wilbur K. McKee as The Solitary Cyclist*
Christopher Morley as The Sign of the Four*
Felix Morley as The Second Stain*
Frank V. Morley as The Three Garridebs*
Edgar W. Smith as The Hound of the Baskervilles*
Vincent Starrett as A Study in Scarlet*
P. M. Stone as The Speckled Band*
Rufus Tucker as The Greek Interpreter*
Earle F. Walbridge as The Sussex Vampire*
Julian Wolff as The Red-Headed League*
* received Investiture at another event during the year
What is an Investiture?

The Woman:
Lee Wright
What is The Woman honour?

"Stand with me here upon the terrace..."
(as named at this Dinner, not their year of passing)
None this year, as far as we know.
What is the origin of “standing on the terrace?”

The Trust does not have a 1944 Dinner Menu.  If you have a copy, or even a scan of one, please contact us.

"Sherlock Holmes" in Life magazine, May 1, 1944, pp. 77-82. (at Google Books)
Describes how Holmes became the "most widely known character in all fiction" and mentions a recent BSI dinner, with many photos, including the one noted below.  Thanks to Juelie Sires for bringing these links to the Trust's attention.

Prince of the Realm: The Most Irregular James Bliss Austin
by Sonia Fetherston, BSI

The BSI Biography Series
Austin was invested at the 1944 BSI Dinner.