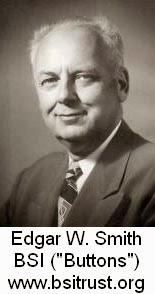 Having taken over the position of Secretary to the BSI, Edgar W. Smith made sure that the BSI Dinner became an annual event.  Twenty six people attended, including author Basil Davenport, Boston Sherlockians James Keddie, Sr. and James Keddie Jr., the mystery writer Rex Stout, and Dr. Julian Wolff (who would ultimately become the head of the BSI in 1961). Toasts were drunk to The Woman, Mrs. Hudson, and Doctor Watson’s Second Wife. The BSI’s Constitution was read.  Robert Keith Leavitt subjected the attendees to a quiz entitled, “A Brief Examination upon the Sacred Writings for the Refreshment of Irregular Memories and the Testing of Those Now Regular Which Aspire to be Otherwise.”  Julian Wolff spoke on the atavistic tendencies toward Black offspring in mixed marriages.  Rex Stout, the guest of honor and principal speaker, advanced that Watson was a woman.  Harvey Officer spoke on Holmes’ religious bent. Frederick Dorr Steele discussed the graphic representations of characters in the Canon. P. M. Stone read a paper entitled “King’s Bench Walk and Baker Street.”

The photo of Edgar W. Smith on this page is courtesy of The Red Circle of Washington, D.C.

"Stand with me here upon the terrace..."
(as named at this Dinner, not their year of passing)
Archie Macdonell, the moving spirit of the Sherlock Holmes Society of England
Miss Helen Simpson
What is the origin of “standing on the terrace?”

The Trust does not have a 1941 Dinner Menu.  If you have a copy, or even a scan of one, please contact us.

Leavitt, Robert Keith, “A Brief Examination upon the Sacred Writings...” (digitized images at Harvard)
Quiz given at dinner.  6 pages, plus another copy filled out.  Sequence 7-19.

"Watson Was a Woman" by Rex Stout in The Saturday Review of Literature, 23, No. 19 (March 1, 1941), 3-4, 16. (at unz.com)
Rex Stout presented his infamous theory about Watson at the 1941 BSI Dinner. His paper appears online, starting with the main link above and concluding with page 16 online.