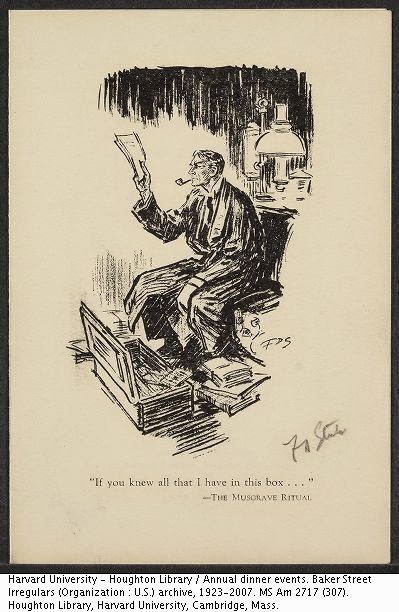 Against the backdrop of World War II, the BSI met again in 1943.  Forty one people attended, including the detective Irving August, mystery writer John Dickson Carr, and Reverend Leslie Marshall (newly designated Chaplain of the BSI).  William S. Hall spoke on Sherlock Holmes’ coat-of-arms. Rufus Tucker read a paper on “Genealogical Notes on Holmes.”  John Dickson Carr spoke on the inner secrets of the Detection Club of London.  Harvey Officer premiered his “Baker Street Suite.”  Robert Keith Leavitt spoke on Dr. Watson’s Second Wound.  Fletcher Pratt spoke on the hidden cryptogram in the Dancing Men code.  Leslie Marshall reminisced about his boyhood memories of Baker Street.  Charles S. Goodman read a paper on “The Dental Holmes.”  Edgar W. Smith presented a paper on “A Scandal in Identity.”  Frederick Dorr Steele was honored for his contribution to the Sherlockian world through his illustrations of the Collier’s Weekly magazine publication of the Holmes stories (and his illustration for the BSI Dinner Menu).

As far as we know, no group photo was taken of the January 8, 1943 BSI Dinner.
The 1943 BSI Dinner menu photo on this page is from the digitized BSI Trust collection at Houghton Library, Harvard University. Click on it to see a larger version.

The Woman:
Rose Louise Hovick, also known as Gypsy Rose Lee.
What is The Woman honour?

"Stand with me here upon the terrace..."
(as named at this Dinner, not their year of passing)
James Keddie, Sr.
What is the origin of “standing on the terrace?”