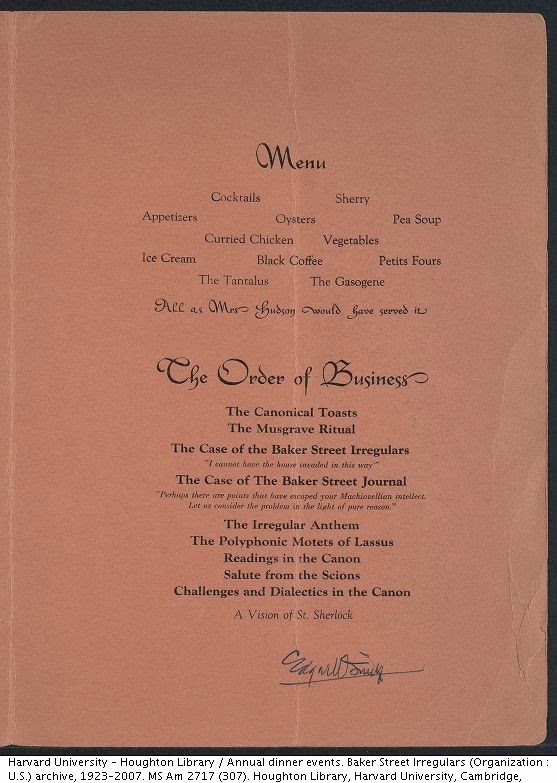 The 94th anniversary of the Master’s birth was marked by the convocation of a Select Committee in Camera of Irregulars, which, as Edgar W. Smith’s report in the April 1948 Baker Street Journal relates, “took counsel on matters of high import relating to the organization’s future.” Thus, many of the customary features of the Irregulars’ meetings were afforded only “passing notice.”

Four Canonical toasts, including Rex Stout’s tribute to “The Woman,” were proffered. James W. Montgomery sang the songs of Birdie Edwards and Irene Adler’s rendering. For the first time since the Irregulars’ inception, Christopher Morley, Gasogene-cum-Tantalus, was not present. In his absence, Robert K. Leavitt and Mr. Stout oversaw the proceedings. Near the evening’s close, Mr. Leavitt presented his rendition of “The Preposterously Paired Performances of the Preacher’s Portrait.”

As far as we know, no group photo was taken of the January 9, 1948 BSI Dinner.
The 1948 BSI Dinner menu photo above is from the digitized BSI Trust collection at Houghton Library, Harvard University. Click on it to see a larger version.