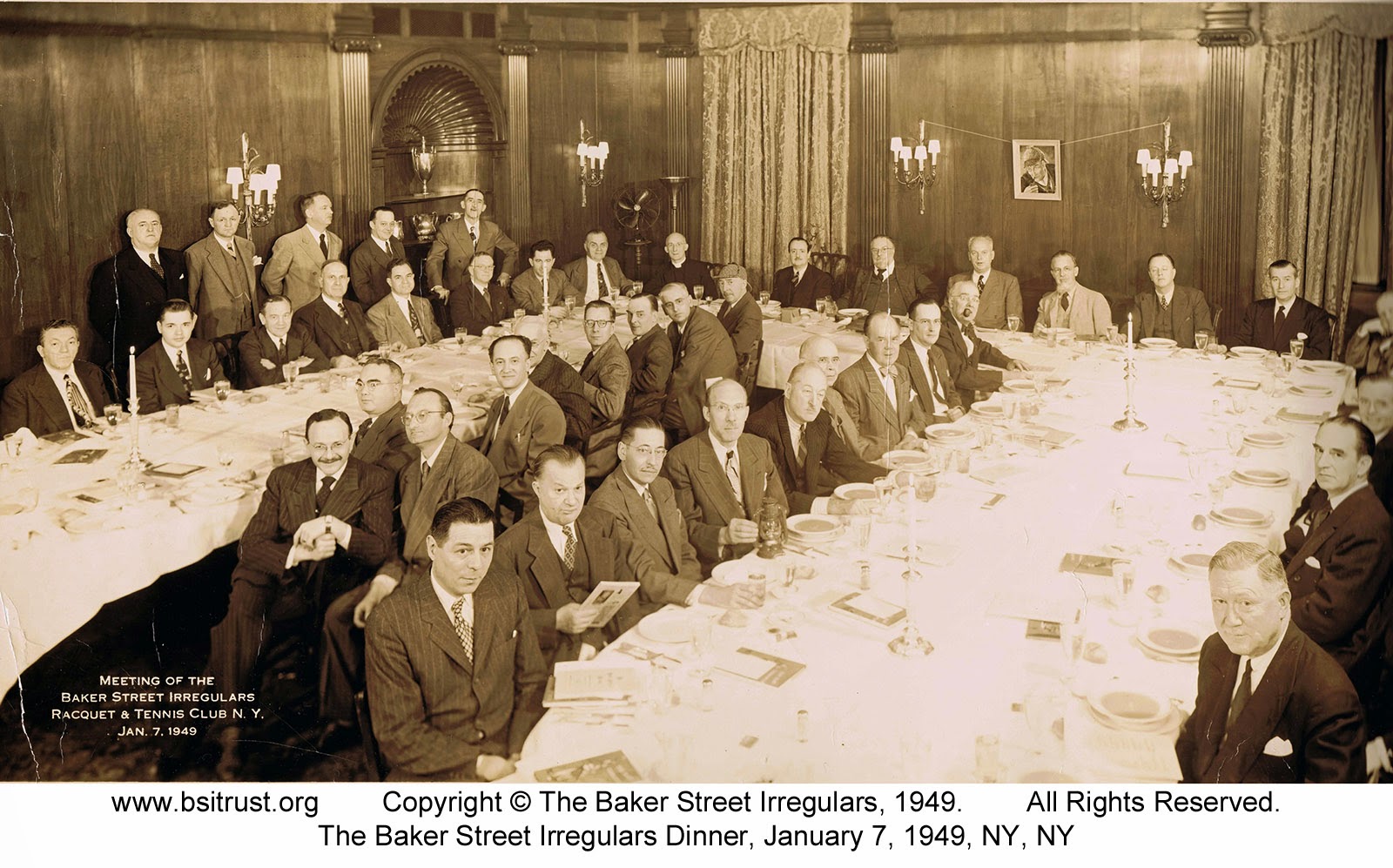 The 95th anniversary of the Master’s birth was greeted with a resumption of Baker Street Irregular rituals at its annual dinner. Among the letters of regret from absent attendees read aloud that evening were dispatches from the 33rd U.S. President, Harry S. Truman, and British Ambassador Sir Oliver Franks, whose missive wished “it were in my power to send you a big quantity of London fog and some hansom cabs…ready to dash away with the members on the next exciting adventure.”

Richard W. Clarke, a member of this year’s class of new Investitures, announced that the Five Orange Pips Award for the best piece in the 1947 Baker Street Journal was being bestowed upon Miss Helene Yuhasova (“The Woman” in 1946) for her contribution, “The Solitary Cyclist Rides Again.” The evening’s festivities were replete with songs, toasts, a performance of “The Blue Carbuncle” by radio artists John Stanley and Peter Greig, readings (including Christopher Morley’s recent Journal contribution, “Tail-Light on Horace”), and the spirited auctioning, by Robert Keith Leavitt, of the BSI’s No. 221B edition of The Adventure of the Blue Carbuncle. Nathan Bengis was the fortunate winner.

John Dickson Carr closed out the proceedings by speaking “intimately and feelingly and well” about Sir Arthur Conan Doyle, the subject of the biography in which Carr was assiduously immersed.

Investitures:
Ben Abramson as The Beryl Coronet
Anthony Boucher as The Valley of Fear*
Jay Finley Christ as The Final Problem
Richard W. Clarke as The Copper Beeches
Elmer Davis as A Case of Identity
Robert Keith Leavitt as The Cardboard Box
Leslie Marshall as A Scandal in Bohemia
Russell McLauchlin as The Naval Treaty
James Montgomery as The Red Circle
Fletcher Pratt as The Dancing Men
Allen Robertson as The Reigate Squires
Rex Stout as The Boscombe Valley Mystery
* received Investiture at another event during the year
What is an Investiture?

1949 BSI Dinner Minutes (digitized images at Harvard)
Note: the minutes repeat some past investitures from 1944 and 1945.

The Trust does not have a 1949 Dinner Menu.  If you have a copy, or even a scan of one, please contact us.